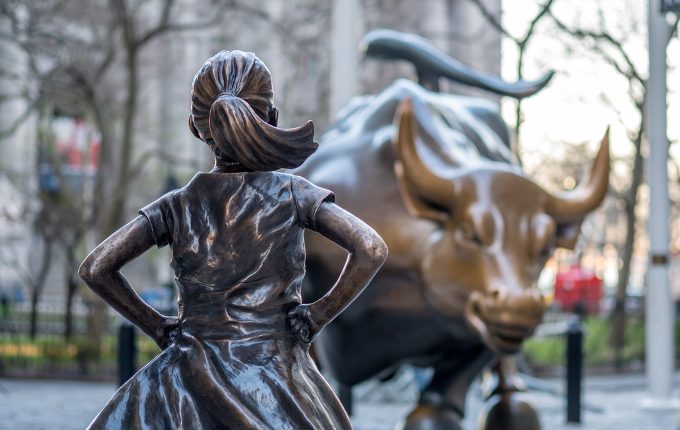 In a recent interview with MarketFox columnist Daniel Grioli, Selden reflected on her path in the investment industry.

And although we don’t want to take the spotlight away from her remarkable career, powered by her expertise in growth equities, she also has a unique view on the issue of diversity, having started her first job on Wall Street at a time when few other women worked there.

Selden joined her uncle’s trading firm at the age of just 14, she tells Grioli.

“Totally out of the blue one year, literally after Thanksgiving dinner, he came to me and asked if I would like to work for him the following summer.”

Her uncle had arranged for her to be the order clerk. He would sit watching the tape conceive orders, quickly write them down on a piece of paper and slap that piece of paper behind him onto her desk.

“I had a stopwatch around my neck and I would grab the piece of paper, run to the trading desk, hit the stopwatch and if they didn’t give me a size and market from the floor of the New York Stock Exchange in 90 seconds, we didn’t pay for the trade,” she recalls.

“In many ways, it was a wonderful role. I was right in the heart of the action.”

But when it was time for lunch that first day, the experience was not quite as wonderful.

“We went through a back alley and went to the lunch room at the New York Stock Exchange where [my uncle] was quietly taken aside,” Selden says.

“I saw the maître d’ whisper something and he came back and very matter-of-factly informed me that we wouldn’t be eating there because women were not allowed on the floor of the stock exchange or in the dining room.

“I, too, took it as a very matter-of-fact [experience]. Again, this was 1961, so it was just a fact of life and I stood silent. We went down another set of alleys and bought a set of sandwiches and went back to our desks.”

She moved to Boston, where she continued working for her uncle’s firm, Josethal & Company, which was a major execution house. She clocked up seven years’ experience before she could even officially apply to register as a broker, for which you had to be 21.

“Once I turned 21, I immediately took the exams to get registered as a broker. But in those days only registered representatives who had dealings with the public, what we think of today as retail, had to be registered,” she says.

“If you were a trader or a broker dealing only with institutions, then you were an employee of the firm and the registration restrictions didn’t apply to you. But I wanted to get registered. I wanted to legitimise what had already been the seven years of working in the industry.”

This drive to legitimise her career resulted in an unexpected opportunity, which she grabbed with both hands.

“The head of the local Boston trading desk had a heart attack in the middle of the day and the registration restrictions had just been extended to internal employees taking orders,” she says.

“I was the only person who didn’t have a retail book of business who was there in the two floors of the firm who was legally fully registered.

“I was busy calculating margin requirements when someone came upstairs and said: ‘Billy’s gone to the hospital. We need someone to run the desk.’ I walked down the stairs and sat at the desk. That was a major turning point for me, of course, because it was the beginning of a truly institutional, large-scale-oriented world of trading and investing.”

Now the Head of the Trading Desk in Boston, she had five employees reporting to her, all men in their 40s and older. But Boston was in many ways still clinging to a public system of discrimination against women.

“In lunch rooms, it was I’m sure some old set of what we call ‘blue laws’, puritanical laws perhaps to keep professional or to keep other types of women professionals out of bars,” Selden says.

“So there were three licences that a bar could have in Boston. There was a tavern licence, there was a bar licence and a lounge licence. In a tavern licence, women were not allowed at the bar. There was literally not only a rail that you’d stand next to, but there was a bar that was about waist height that defined the area that was considered the bar and women could not go past that area.

“But also to have a tavern licence was considered fairly desirable because you could serve men [food] very quickly, particularly down in the financial district, which is adjacent to the wharf district down here.

“So when you think of it, it’s really ironic. The favoured places for quick and actually pretty good food were the taverns where people who worked in the industry would also drink. Those were the places that women literally legally couldn’t go.”

But times were changing and more women entered the financial industry. In Boston, female professionals banded together and decided that enough was enough.

“It was in this time, by then the early ’70s, that there was a revolt, a sit-in,” Selden recalls.

“Everyone was much more focused on, of course, the segregation in the South and far more important things, but the women of the Boston financial community actually had a sit-in at one of the major taverns.

“It’s called Pete’s. It still exists downtown and there’s a little bronze plaque that’s been relegated into a dark corner, but you can see the whole history of the integration of the taverns, bars and lounges. The city council finally changed all of this legislation. But when you think of it, it really isn’t that long ago.”

In the following years, Selden helped break down barriers for women, pushing for sell-side firms to include more women in their training programs.

“For example, women weren’t getting a chance at the ‘gold ring’ at Goldman because the selection criteria were so focused on high-energy, aggressive men who would be traders or salespeople. Women weren’t suited to those tasks was the bias and therefore that’s why the training program was 75 or 80 per cent men,” she says.

Selden also mentioned the important work done by New York-based not-for-profit organisation Catalyst, which not only focused on remuneration issues, but also on designing entire career paths that were better suited to women.

“So we changed a lot and the big investment banks brought in a lot of women. Women did well. No big surprise, but they did well until they were in their mid-30s. They’d do well for 10 years and be right there shoulder to shoulder and then they’d disappear,” she notes.

“Some of it was disappearing into child-bearing years and not wanting the hours, but some of it was just personal, saying: ‘You know, I don’t feel like going in and killing my colleagues every day. I’m really tired of that. I’ve killed a few of them. I’ve gotten up to the next step, but it’s just not really satisfying.’”

“They went off to smaller organisations, to more flexible time schedules, but the big firms had to ask themselves: ‘Maybe it isn’t enough to just open the door and let women in. Maybe we have to acknowledge that women have different goals, different processes and that’s part of the benefit.’ It’s not just that they were missing out on half of the raw material for investment banking. They were actually missing out on some different ways of thinking.”

She says she believes the thinking about diversity has moved forward a lot in the past 20 years, but it hasn’t always translated into real-life results.

“The diversity movement has not moved forward a lot in terms of outcomes. Women are still phasing in and out of the workplace. We’re losing women in their 40s and 50s. They are in unstructured entrepreneurial environments. They’re not part of the armies that have to be part of the financial services industry,” she says.

Today, the issue of diversity also encompasses more than just the equal treatment of women in the workplace and in some cases has been taken to the extreme, focusing increasingly on self-identification and subcultures, she says.

“The diversity movement is alive and well; there is consciousness to some extent. [But] I want to choose the right verb here, whether it’s been diverted or diluted … it’s a much broader philosophical conversation … around … what is known as identity politics,” she says.

“If you’re out there fighting for parity for filling the blank of all kinds of specialties of how people define themselves by tribe, it somewhat diverted some energy from, we’ll call it, the pure: ‘How can we make the workplace attractive for people who have different skills, who are willing to work in large organisations by contributing their specific skill? How do we get away from the cookie-cutter?’

“It’s very hard in a political world where people at this point in time have various motives to want to be cookie-cuttered, whether it is: ‘I want to be a pro-family conservative person or I want to be a progressive, no-borders person.’ There’s a lot of self-definition that isn’t part of being cohesive and diverse,” she says.