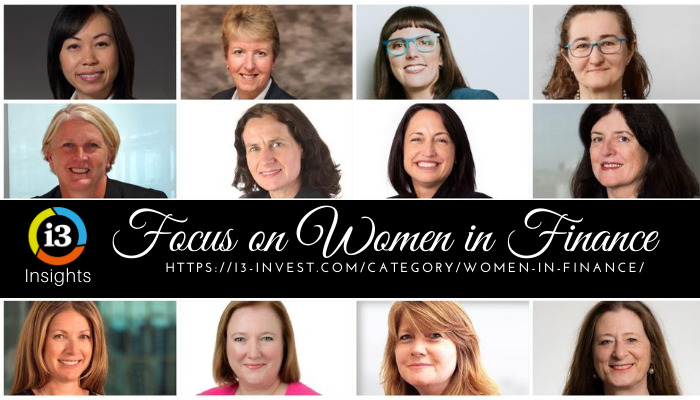 Guide to Women in Finance

Although progress has been made in improving the rate of female participation in board roles over the years, we still have a long way to go when it comes to executive roles. This guide highlights the achievements of senior female investment professionals and we hope it inspires a new generation to follow in their footsteps.

In the past five years, several initiatives have been started around the world to encourage companies to hire more women to executive and board positions. And some progress has been made over this period.

The Cranfield University in Bedfordshire, United Kingdom, has been keeping tabs on the number of female directors at companies on the FTSE 100 Index for over two decades and publishes its findings every year in “The Female FTSE Board Report.”

In Australia, a similar picture has emerged in recent years.

With this, the voluntary target of 30 per cent set by the Australian Institute of Company Directors in April 2015 has been reached.

But the picture is much less rosy for the number of female executives in listed companies. The Cranfield University report shows that as of June 2019, women represented only 10.9 per cent of executives in FTSE 100 companies, a mere 2.3 per cent improvement on 2015.

And whereas the glass ceiling is becoming thinner, women are now also facing a glass cliff: the phenomenon of women making it to the boardroom but finding themselves over-represented in precarious leadership positions, often being handed unsolvable problems.

This concept was first described by academics Michelle Ryan and Alex Haslam from the University of Exeter in the UK. Their research showed women were indeed starting to secure seats at boardroom tables. But the problem was their positions were inherently unstable, causing them to resign or be dismissed.

So we are not yet where we should be.

But the investment industry itself has become more active on female participation at the higher levels in recent years. In October 2020, pension fund HESTA launched a new initiative, called 40:40 Vision, which aims to see women fill at least 40 per cent of executive roles in the ASX200 by 2030.

It also has the support of industry partners Chief Executive Women, the Australian Council of Superannuation Investors, 30% Club and the Workplace Gender Equality Agency.

Investors joining the initiative will commit to engaging with ASX 200 companies to encourage them to pledge to achieve 40 per cent women, 40 per cent men and 20 per cent any gender among C-suite roles by 2030 and to set clear and public targets towards this goal.

We hope to contribute to female inclusion through this page by not only highlighting the achievement of senior female executives, but also by inspiring a new generation of leaders. After all, women join the finance profession in similar numbers to men, but they are under-represented in the senior ranks of companies.

As part of our commitment to increase the visibility of women and their contributions to the investment industry, we’ve created this brief guide, which complements our Women in Finance category in [i3] Insights. It provides an overview of the interviews we’ve conducted with senior investment professionals, predominantly in Australia and New Zealand.

This overview is by no means exhaustive, but we hope to add to it in the years to come.

Although there are relatively few female Chief Investment Officers in Australia and New Zealand, we’ve been lucky enough to interview several of them over the years. We spoke to Sonya Sawtell-Rickson, CIO of HESTA, about the fund’s journey to insourcing asset management functions, while Coal LSL CIO and former State Super CIO Lisbeth Rasmussen sat down with us to tell us about her 30-plus-year career in investing.

We’ve also spoken several times to Sue Brake, who is currently deputy CIO of the Future Fund. Brake discussed governance, both the added value of good governance and also the costs of bad governance.

There are even fewer female Chief Executive Officers, but we were inspired by our conversation with Jo Townsend, CEO of Funds SA. Townsend, who is also a former General Manager of Investments at super fund REST, discussed the need to boost resources and systems after a period of rapid growth for the fund. She also showed why insourcing asset management functions for Funds SA would not bring the same benefits as it has for some of the country’s largest pension funds.

But one of the most influential women in the Australian institutional investment industry is, without doubt, Fiona Trafford-Walker, one of the founders of asset consultant Frontier Advisors and adviser to some of the largest super funds in the country. Trafford-Walker sat down with us for a podcast interview to talk about her career and was as candid and insightful as ever, giving her views on the changing role of asset consultants, the underperformance of value-style investing and the old chestnut of style drift.

We also looked at the more innovative approaches to portfolio construction, featuring Carrie Lo, portfolio manager with CalSTRS and lead developer of the fund’s risk mitigation strategy. Lo is trying to solve the problem of portfolio construction in a low-yield environment, seeking equity diversification through trend following, global macro and factor strategies.

Talking about factor strategies, Bev Durston, Managing Director of Edgehaven and a fount of knowledge on alternative assets, warned of the popularity of factor-based investment products and pointed to a number of issues, including spurious correlations and underperformance during regime changes. More recently, we sat down with Durston to discuss the opportunities in distressed debt, an area that usually does well towards the end of a financial crisis. She was some what careful about the scope of the opportunity this time.

As Susan Oh, Director, Risk Parity, Currency Hedging and Strategic Implementation at Pennsylvanian pension fund Public School Employees’ Retirement System, saw her non-United States equity portfolio take a plunge during the Global Financial Crisis, she wondered if there was a better way of doing things. Oh ended up taking a risk-parity approach and is slowly transforming the portfolio to reflect a more balanced risk profile.

One of the most pressing puzzles to be solved in the pension industry in Australia today is the development of adequate retirement products. Jacki Ellis, Portfolio Manager for Retirement Strategy with First State Super, spoke to us about the issues with creating a default product and the need for customisation. The comprehensive income products for retirement proposed by the government are meant to enshrine the minimum requirements for a retirement product in law, but where funds can create a sensible default option for the average 25-year-old, the individual circumstances in retirement can be so diverse that standardisation proves difficult in this phase of someone’s life.

Investment teams in insurance companies often have quite a unique set of requirements and targets compared to their superannuation peers. In an interview with Stephanie Weston, who is Head of Portfolio Design at HESTA and the former Investment Management Director for insurer Genworth Australia, she proposed the division of insurance portfolios into short, medium and long-term tranches, each with their own risk and return objectives. This helps insurance companies align their investment strategies with their liabilities.

We also spoke with Judith Smith, who has been one of the leading lights in the domestic private equity and venture capital industries. Smith, the former Head of Private Equity at Industry Funds Management and current Chair of LUCRF’s investment committee, discussed the development of the venture capital industry in Australia since the government introduced favourable taxation regulations for investments into start-up technology companies in the 1980s and the problems over the years with fund structures.

Former Head of Infrastructure at TCorp Lianne Buck took us through some of the highlights of establishing a real assets portfolio for the asset manager of the New South Wales state government, including co-investments with several of the fund’s Canandian peers. Buck also addressed the future of the airport industry under the global pandemic and the resilience of the individual assets.

Anne-Maree O’Connor, Head of Responsible Investment with New Zealand Super, explained how environmental, social and corporate governance (ESG) issues impact on investments and how this area tries to quantify unaccounted-for costs. O’Connor also emphasised the importance of culture within an organisation and pointed out it is easy to dismiss the focus on culture as a fad, until something goes wrong.

Another New Zealand Super staffer, Del Hart, who is Head of External Investments and Partnerships for the fund, explained how the fund thinks about partnerships and how it has mapped the expertise of its fund managers with its internal research program. Hart showed how the fund has broken down the partnerships into three areas of focus: research support, secondments and fireside chats. She said sharing knowledge is the main aim, but in order to do this effectively, you need to be targeted in your approach.

Frustrated with the high fees charged by commercial private equity funds, especially compared to the returns they were delivering, as well as governance and performance challenges of poorly constructed direct businesses, Debbie Birch, a veteran of the private equity industry, set out to create a new model for Māori investors to co-invest alongside institutional investors in unlisted New Zealand companies. The resulting vehicle, Te Pūia Tāpapa, closed with almost double the capital initially sought to establish the fund.

Petra Suhren-Chan Tung, CIO of the Samoa National Provident Fund, explained the fund’s solution to costly personal loans on the island. The provident fund provides a range of loans to members, including housing, land and education loans, where members can borrow up to 50 per cent of their account balance.

Unfortunately, domestic violence permeates all levels of society and the investment industry is no exception. [i3] Insights had the honour to speak with Justina Sau only weeks before her untimely death. Sau, the founder CEO of the Unit Trust of Samoa, was an extraordinary business person and trailblazer for Samoan women, shattering glass ceilings wherever she went. A list of leading women would not be complete without remembering her.

And let’s not forget about Daniel Grioli’s podcast interview with US-based Denise Selden, Senior Portfolio Manager with Copper Rock Capital Partners and veteran growth equity investor. Selden was one of the few women to work on Wall Street 60 years ago and found, at that time, women were not allowed on the floor of the stock exchange or even in the dining room. She talked about the sit-ins female finance professionals organised in order to change the status quo, but also about the dangers of the current identity politics. A truly impressive story.

Beyond the Panel Pledge

The Investment Innovation Institute [i3] supports the Panel Pledge and we work hard to ensure women are represented in all of our panel discussions and speaker line-ups. We will avoid panels consisting of only men or where the only female participant is the chair of the session.

We aim to extend the philosophy of the Panel Pledge to all of our activities and in addition to female participation in our forums, we also strive to increase the visibility of women by regularly featuring senior female investors in our publication, [i3] Insights, and on our website. We also aim for gender balance in our [i3] Podcast series.

In doing so, we hope to contribute to breaking the glass ceilings and overcoming the cliffs.