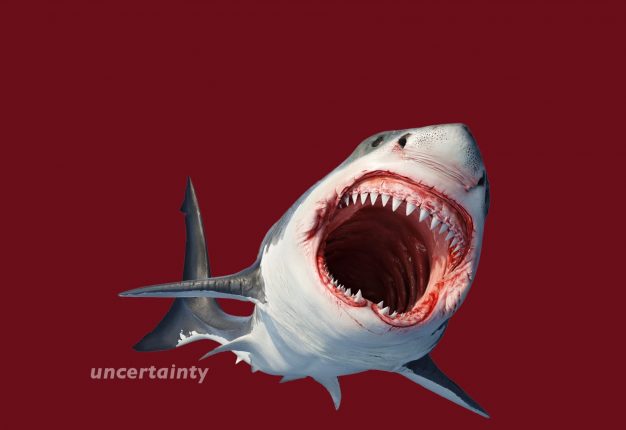 Why are we so afraid of sharks?

This is probably fuelled by our fear of the unknown, where the uncertain depths of the oceans are filled with mystery, engendering the perceived likelihood of being attacked.

Beyond psychology, Hollywood has a part to play too, with film director Steven Spielberg’s adaptation of Peter Benchley’s novel ‘Jaws’ depicting the great white shark as an aggressive human predator.

However on all accounts, the chances of humans dying from shark attacks are minuscule compared to say heart disease or car accidents. Yet that gruesome thought seems to creep us out more, causing us to significantly overreact.

Unfortunately, our attempt to alleviate our fears of uncertainty has often resulted in severe unintended consequences.

The COVID-19 pandemic has fractured financial markets and unleashed a raft of events impacting investment portfolios.

Top of the list are liquidity risks, affecting superannuation funds as a result of irrational member switching and the knee-jerk reaction of the government’s early release scheme. The revaluation of unlisted assets, commitment pacing and currency hedging also took its toll on some funds.

The government’s aggressive fiscal and monetary measures restored some peace to the financial markets in 2020, but not without side effects. Inflation risk has crept into the economy, though the jury is still out as to its persistence in the longer term.

The strong-armed tactics of government to legislate for superannuation underperformance has underlined the idiosyncratic nature of political and regulatory risks. Despite the best of intentions, these reforms may promote short-term thinking, running counter to members’ long term retirement needs.

The urgency of climate risks is reasonably well documented, but standards and frameworks still require more harmonisation. While some funds have embarked on the journey to Net Zero 2050, most remain unsure of the pathways to achieving this outcome amid lackadaisical government commitment.

The elevated levels of liquidity in the markets have inevitably forced funds to embrace riskier assets, given the low yield environment. It has also resulted in severe distortion in correlations, causing asset allocation and diversification to be more challenging.

Is chasing alpha proving to be more elusive?

Strategy in the midst of uncertainty

Despite the plethora of known or unknown risks, the biggest risk is that of not achieving investment outcomes for stakeholders or members.

Regardless of whether ‘this time is different’ or the irrationality of markets, there remain opportunities for the discerning investor. These may relate to structural dislocation of markets, post-COVID economic recovery, or energy transition possibilities.

At the total portfolio level, innovative approaches to portfolio construction may include cross asset class synergies as well as the integration of alternative data sets.

How should investors construct portfolios for the long term and yet have the steadfast governance and nimbleness to make decisions in the shorter term, bearing in mind the confluences of ‘unknown unknowns’?

Under a cloud of anxiety and apprehension, we hope to convene a robust discussion on asset allocation for CIOs, strategists and senior portfolio managers.