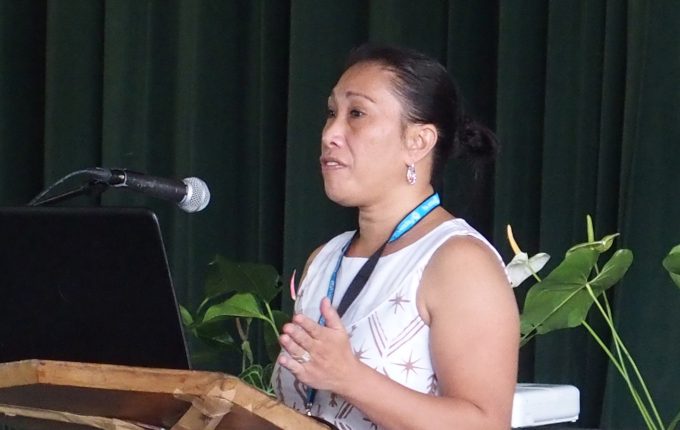 This interview was conducted just weeks before the unfortunate passing of Justina Sau, Chief Executive Officer of the Unit Trust of Samoa. In consultation with Justina’s friends and colleagues, we’ve decided to publish this interview as a tribute to an extraordinary business person and trailblazer for Samoan women.

Origins of the Unit Trust of Samoa (UTOS)

The Unit Trust of Samoa (UTOS) was not established to provide asset management services to government institutions, or even to wealthy individuals. It was set up to provide a cost-effective investment vehicle to the everyday Samoan.

The prospectus of the trust makes it clear that it aims to enable every Samoan to generate wealth.

“If you are a small business owner, farmer, fisherman or low-income earner, UTOS would give you the opportunity to diversify your investment risk while providing you with a good return,” the document states.

In order to make the trust accessible, it provides some tangible benefits to members. Samoans can invest in as little as 50 units, while any capital gains are exempt from the 27 per cent capital gains tax.

In addition, the net profits of the trust are also exempt from income tax, so all of the profits generated by the trust are distributed to unitholders.

Yet, when the trust was established it was greeted with some suspicion, Justina Sau, founding Chief Executive Officer of UTOS, said in an interview with [i3] Insights.

“When we first started it was really hard to get people to invest in us because people thought we were going to fail within a few years,” Sau said.

Since we started paying dividends in 2013, that’s when the confidence [came]

“But since we started paying dividends in 2013, that’s when the confidence [came] and people are now starting to understand the concept of investing. So we’ve had big investors coming in over the last two years, including businesses.

The unit trust was established in 2009, initially as an entity within the Ministry of Finance until Sau was appointed as its first CEO on 23 February 2011. Its establishment coincided with the decision by the Samoan government to privatise its telecom business, Blue Sky Samoa.

“The unit trust was set up in parallel with the privatisation program of the government,” Sau said.

“That is how we got involved with the telecom companies because we had to set up the unit trust before they could privatise.

“The telephone company was 100 per cent owned by government at the time. The idea was to set up the trust and retain 25 per cent in the trust for Samoans and sell 75 per cent to a private investor.”

The unit trust acquired the 25 per cent shareholding in Blue Sky Samoa, then called SamoaTel, at a price of US$7.9 million.

It also borrowed money to offer loans to government institutions in an effort to establish a source of income.

“When we first started, we had to borrow because there were not enough surplus funds from our target group of investors,” Sau said.

“There wasn’t enough to get our investment portfolio up as fast as we wanted to, so we had to borrow quite a large amount of funds to start off our portfolio.

“We borrowed from other state-owned enterprises, for example, the Samoa National Provident Fund. They invested some of their funds in our units and we also borrowed from them.

“We also borrowed from the Accident Compensation Corporation and the Samoa International Finance Authority. They have a lot of surplus funds that they invest with us.

By 2013, Sau brought the unit trust to profitability and it no longer needed support from the government.

Last year, the trust announced a record dividend payout of just over US$1.56 million. Its investment portfolio has grown to about US$40 million, although it still owes almost US$20 million in debt.

Sau’s achievements with UTOS reflect her trailblazing spirit. Before joining the unit trust, she worked at the Ministry of Finance as Assistant CEO of a division that monitored state-owned enterprises. She assisted in the establishment of that institution, too.

And even in school she stood out. Sau was one of the first females to attend St Joseph College, which was still an all-boys school in 1993, and became the first female dux of the school.

Before her untimely death, Sau was focused on increasing the investment return to members and aimed to create a more diversified portfolio in order to reduce risk.

UTOS owns just three direct equity holdings: its stake in Blue Sky Samoa, an interest in Blue Sky Holdings, which is the holding company for a 60 per cent stake in Telecom Cook Island, and shares in the Samoa Submarine Cable Company.

We always look at an internal rate of return of 16 per cent, which is very high, but we would like to do that. For our lending, our interest rates are between 6.5 and 9 per cent

“In terms of the [investment] opportunities locally, it is very limited. We try to get state-owned enterprises and large projects and bid for that, but we struggle to find investments locally,” Sau said.

“For equity, we always look at an internal rate of return of 16 per cent, which is very high, but we would like to do that. For our lending, our interest rates are between 6.5 and 9 per cent.”

When the trust started to pay out dividends in 2013 it attracted a lot of new investors and some of these funds have been sitting in cash, waiting to be invested.

“Because we already co-invest with ATH (Amalgamated Telecom Holdings) in Blue Sky Samoa and we also co-invest in Blue Sky Pacific Holdings, the understanding is that we co-invest in opportunities around the region together,” she said.

“Partnering with ATH, there is the opportunity for us to acquire part of their shares in their current subsidiaries, for example, Telecom Vanuatu.

“We need to diversify. Our plan is to diversify in terms of the type of assets in which we invest. For example, we don’t own any properties, but over the long term that is another area that we will look at.

“We haven’t really invested in properties, because we don’t really have a strong financial backing at this time. So what we are concentrating on are investments where we can get regular income, such as lending. Within equities we also look at companies that are well-established and are paying dividends.

“But moving forward we would like to diversify our portfolio. In April, we have just invested in units of the Unit Trust of Fiji.

“We’ve also looked at hotels, but it is still a high-risk industry here in Samoa, especially with climate change. So we have decided to hold off on investing in hotels at this time.”

Hurricanes are one of the key risks in owning hotels in Samoa. The hurricane season runs from November to March and not only affects tourism, but there is also a substantial risk of damage to the properties.

A well-known example is the flooding of the iconic hotel Aggie Grey in December 2012. Cyclone Evan caused the Vaisigano River to flood, filling up all of the ground floor buildings of the hotel. It could not be saved and was demolished to make place for a Sheraton hotel.

“It took nearly two years to rebuild and then six months after it opened there was a half day of pouring rain, it wasn’t even a cyclone, and the hotel flooded again. Those are the sort of risks I’m talking about,” Sau said.

Unfortunately, Sau died before she could lead UTOS in its next phase of growth, but she will be fondly remembered by many of her peers around the Asia-Pacific region.

She is survived by four children.

Support for victims of domestic violence is available through the Samoa Victim Support Group: https://www.facebook.com/samoavictimsupportgroup.