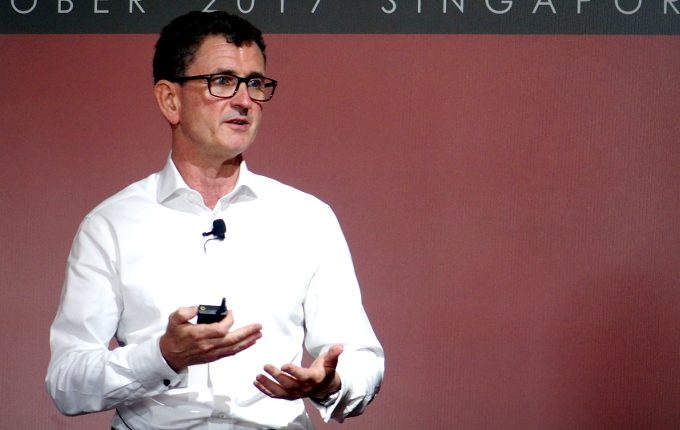 But it is not all doom and gloom, Andrew Parry, Head of Sustainable Investing for Hermes Investment Management, says.

The search for a more sustainable future leaves plenty of opportunities for investors.

“The challenges for us as investors who invest for the long term is to recognise some of these climate change challenges, but not to see them just as a source of risk and worry, but actually as an exciting source of potential growth,” Parry says at the Investment Innovation Institute’s Global Investment Strategy Forum in Singapore last month.

“The way I see the world is one of great opportunities.”

A good guide for tracking these opportunities is formed by the United Nations Sustainable Development Goals, he says.

“The UN Sustainable Development Goals have become a standard framework for the very noble aim of eradicating poverty around the world. I think a lot of people think these are a very worthy set of nice-to-have goals,” he says.

“But the reality is that they represent a huge growth opportunity because these effectively are the unmet needs of societies around the world.”

The challenges for us as investors who invest for the long term is to recognise some of these challenges, but not to see them just as a source of risk and worry, but actually as an exciting source of potential growth.

The 17 goals were enshrined in a resolution in September 2015 and set out a roadmap for building a more sustainable future. They are not just about climate change, but also set out principles for eradicating poverty, improving health and education.

“People often don’t realise that [in addition to the 17 goals] there are 169 targets, which are much more applicable to what companies actually do and can function as a framework for identifying the beta of future growth,” Parry says.

“For me, these targets represent very important impact themes that I can then relate back to investable themes in public equities and which are emerging, secular and probably unrelated to what [US Federal Reserve System Chair] Janet Yellen or [European Central Bank President] Mario Draghi do in terms of macroeconomic policies.”

“Because by meeting unmet needs in society or finding solutions to those challenges, you are bringing new, incremental demand into the equation. The companies that find the solutions to that future growth are the new growth stories over the next 20 years.”

One well-known climate change theme is the transition from fossil fuels-derived energy to clean energy solutions. But Parry says the greatest opportunities are not necessarily found in Europe.

“In 2016, on a global basis, for every dollar invested in fossil fuels, there were two invested in alternative energy. Europe, as a whole, already produces 20 per cent of its daily energy from wind,” he notes.

“But it is actually China who leads the world; China is the most rapid adopter of alternative energy. Why? Well it is resource scarce and anybody who has been to Beijing will know that China has a pollution problem.”

Parry compares China’s current struggles with pollution to the situation in the United Kingdom in the first half of the 20th century. London still had many coal plants, while fuel burned by households contributed to high levels of smog in the city.

In December 1952, the smog became so oppressive that it resulted in the immediate death of 4000 people, while another 8000 died in the following months.

A cleaner environment is not only good socially, but also good for the economy because it will boost productivity.

This ultimately resulted in the Clean Air Act of 1956, under which certain types of fuel were banned and many power plants were moved outside of the city. The act is also thought to have contributed to the modern environmental movement.

It is not unlikely China is on a similar path and Parry believes this will ultimately result in higher economic growth.

“A cleaner environment is not only good socially, but also good for the economy because it will boost productivity,” he says.

A similar argument can be made for education.

“Education also provides secondary benefits, such as improving women’s health in countries like Bangladesh and India. It increases the rate of vaccination, which produces a better health outcome for local communities. But it also boosts productivity for those companies using labour in those areas,” Parry says.

Yet, to capitalise on the move towards a more sustainable future, you still need to ensure you look at these opportunities from an investor’s viewpoint, he points out.

“Is it going to be a winner or a marginal player? And is it the right time and the right price?

To be a good investor you have to find that inflection point in the development curve. When too many people are chasing too few orders in the short term, that is the time to invest.

He points to the rapid development of wind energy over the past decade.

“In 2007, you could have made the prediction that wind as a source of alternative energy would grow substantially quicker than the consensus expectation. The IEA (International Energy Agency) has had to continually revise up their projections of wind [energy] and the number of installed wind turbines has increased exponentially,” he says.

“So if you had the view that wind turbines would be more successful than the market predicted in 2007, then you would have naturally focused on a Danish company, Vestas. Vestas was the biggest manufacturer of wind turbines in the world.

“Unfortunately, Vestas had exceedingly poor accounting standards, it was not converting its orders into cash and they were highly reliant on subsidies, which is unsustainable in the long term.

“Along comes 2008, the financial crisis, and all of these things become horribly apparent: subsidies were scaled back or withdrawn, the accounting issues come to the fore and the shares collapse 95 per cent.”

In 2007, Vestas would have been a poor investment, despite the growth of the wind energy market, but only a few years later the situation changed, he notes.

“Fast-forward to 2012 when everyone hated Vestas, but now [the company] has new management, the balance sheet has been cleaned up, they corrected a lot of the errors and the valuation was much lower.

“If you had bought it then, you would have made more than 10 times your money.”

“To be a good investor you have to find that inflection point in the development curve. When too many people are chasing too few orders in the short term, that is the time to invest,” Parry says.

Survival of the fittest: How Indexing Will Save Active Management The Problem with Factor Investing