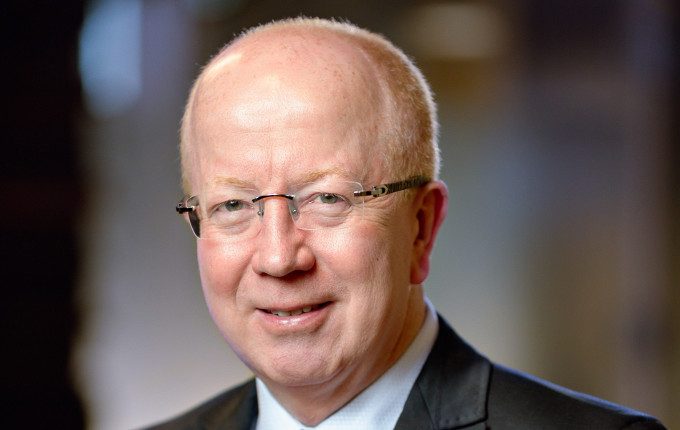 Ever since interest rates hit all-time lows in 2016 and were even negative in countries such as Japan, Germany and Spain, investors have been preparing for the inevitable rise in rates. After all, economic growth is cyclical and at some point rates have to rise, right?

But what if this is not the case?

Jim McCaughan, Chief Executive Officer of Principal Global Investors, argues there are forces at play that may keep interest rates down permanently.

“Don’t assume that the 2 per cent yield of a 10-year bond is a low yield that needs to go up,” McCaughan says in an interview with i3 Insights.

“It might go up a little, but 10 years ago the 10-year yield went to 12 per cent. We are in a different set of financial parameters here.”

Recent technological advancements form part of the explanation, he says.

Although artificial intelligence and big data have made it into mainstream media, causing both elation and concern, the impact of technological advancements on the global economy are not always well understood.

Technology causes deflation: as the functionality of products and services improve, the cost reduces at the same time.

But the current wave of technological advancements and the domination of large technology companies in listed markets has also changed the demand for capital.

“One of the controversial things in the world economy is the shortfall of capital investments against savings,” McCaughan says.

“Those who want to see stimulus, led by [American economist] Larry Summers, say there is a shortfall in demand.

“I would argue that it is not a shortfall in demand, but it is a structural change towards a less capital-intensive economy.

“The capital stock of a successful company right now is intellectual property. In many of the biggest companies’ cases, such as Amazon, Google and Apple, they don’t own factories and buildings in a big way. The real strategic thing that they own is code.

“This means that very large businesses with a lot of revenue and profits operate without much capital stock these days. This is a major structural change.

“If my argument prevails, then you are going to see structural excess of savings over capital investments, which means a prolonged period of very low interest rates.”

If my argument prevails, then you are going to see structural excess of savings over capital investments, which means a prolonged period of very low interest rates

This development is accentuated by the ageing of the global population. Older people tend to spend less on manufactured goods than young people, which amplifies the impact of deflation from technological advancement.

“Younger people are consuming a lot of goods, while older people tend to have enough stuff. Older people consume mainly services, whether it is travel, tourism or healthcare,” McCaughan says.

“So the way it works with manufacturing is that an ageing population is actually quite deflationary because it reduces the demand for manufactured goods and commodities.

“I would argue that both technology and an ageing population are deflationary forces, which tend to make the nominal increase in gross domestic product relatively slow.”

This is a dire prospect for retirees and those who are transitioning to retirement. When a lot of savings chase an income-generating instrument such as a bond, then the price goes up and the yield goes down.

“There are variations on this argument, but it is not a nice argument for your typical superannuation fund. All things being equal, you best get used to low interest rates,” McCaughan says.

Infrastructure and the Canals of the 21st Century

Underestimating the pace of technological advancement could lead to some potential misallocated investments, particularly in the area of infrastructure, McCaughan warns.

Infrastructure has always been a long-term play, for example port leases of up to 99 years are not uncommon. But many infrastructure sectors, including transport, power distribution and telecommunications, are likely to change dramatically in the coming decades, making the longevity of current projects questionable.

“There was an Australian investor who told me recently: ‘We don’t want to invest in the canals of the 21st century,’” McCaughan says.

“I think that is a great way to think about it because some of the infrastructure that we are collectively investing in is going to be obsolete in two or three decades, just as the canals were when they were built [in 18th century England, before becoming obsolete due to the invention of the steam train].”

To illustrate his point, he points to the development of autonomous vehicles, which could become widespread over the next 10 to 15 years.

“I tend to think that driving in 15 years’ time is probably going to be seen as anti-social as smoking is now,” he says.

“Autonomous cars tend to drive much closer together and they tend not to do a lot of things that people do when they drive, which means we probably have more roads than we need at that stage.”

Power transmission is also likely to change as improvements in wind and solar power are likely to cause a decentralisation of energy generation.

“Power transmission is going to change a lot because over the next decades they are not going to build as many of these megawatt power stations. Power generation is becoming much more distributed, where you go from a power transmission network tree to something that looks much more like a network,” he says.

So governments might feel they are required to build a lot more infrastructure, but they need to be careful what projects they invest in.

“If you look at the crowded roads and airports around the world, you’d say: ‘Hey, we need to build a lot more infrastructure,’” McCaughan says.

“But policymakers may make the wrong choices if they are going to underestimate the impact of technology.”