Superannuation is an important component of Australians’ retirement plans and an important sector of the economy.  Many of the elements in the superannuation system work well but there is always potential for improvement.

Trustees have fiduciary relationships with their members.  At a high level, the areas in which improvements can be sought include:

APRA’s heatmap is a good way for APRA to “assist” Trustees to recognise areas where they can improve.  Through periodic analysis of evolving best practice, it is possible to achieve meaningful continuous improvements.

There are many good aspects of the heatmap.  Applying focus to fees, performance and sustainability are important elements for any Trustee and a heatmap can certainly provide a solid foundation for APRA to have discussions with Trustees around issues that are actually quite complex. Used in a constructive way the heatmap can lead to an even better system.

However, with great power comes great responsibility.  There are some potential outcomes from the heatmap that could be counterproductive.  In terms of reporting, this centres on what could be simplistic but sensationalised reporting of heatmap results.

More substantive issues primarily arise in relation to the way in which fees and performance are presented and interpreted.

It is good that APRA has identified separate fees.  However, the fee that matters most is not separately identified.  This is the fee the Trustee takes for itself for acting in its role as a fiduciary and what it pays to related parties.

Trustees should be encouraged to make investment decisions on the basis of expected outcomes.  A Trustee could well take a decision to operate a fund exclusively with the use of indexed public market securities. However, this should be done because of a well-considered investment view on such investments being fit-for-purpose[1] and value-for-money, not purely on the basis of fees.

Fees that a Trustee pays to unrelated third parties are effectively a cost of doing business.  In fact, the ability of a Trustee to access investments and negotiate terms is likely to be much better than members can do as individuals and, in some cases, such opportunities would not be available at all to an individual.

Including amounts paid to unrelated third parties to manage these investments as “fees” masks and distorts what might actually represent a saving for members compared to what they could do themselves.  It also discourages Trustees from seeking the best possible way to exploit an investment idea[2].

In order to assist Trustees to deliver the best they can on fees for their members, APRA is well-placed to survey fee arrangements for material outsourcing arrangements. As the regulator, APRA can do this in a way that does not compromise confidentiality agreements to which Trustees may be committed.

Providing summary information to Trustees would be of huge benefit.  Trustees would be able to compare the fees that they have negotiated with those in the market.  They will also have a solid basis for benchmarking relationships with related parties.

To illustrate, data for a specific type of investment mandate might be reflected in the following chart. 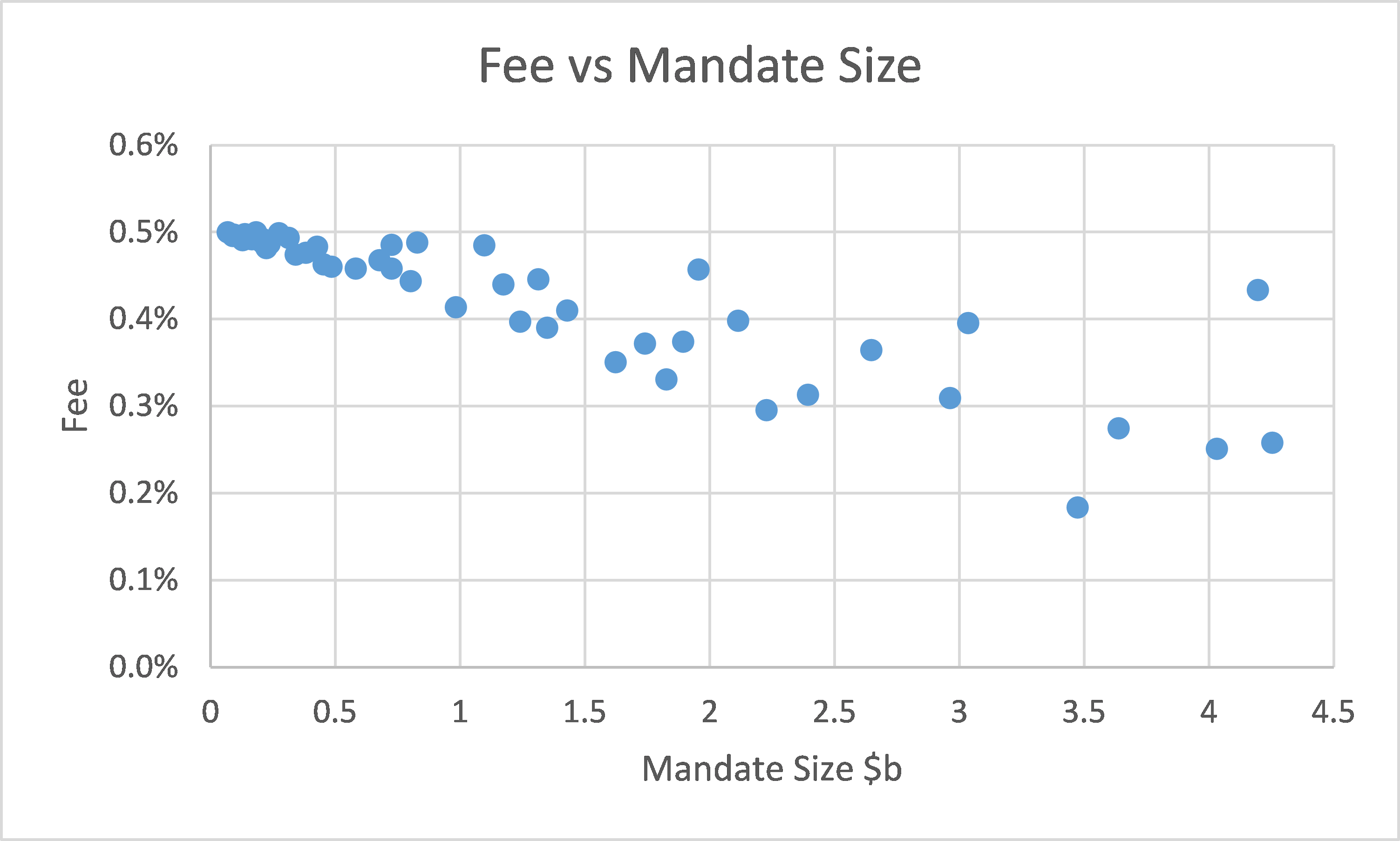 Similar like-for-like comparisons could be completed for brokerage, administration, custody and other material activities.  These actions would provide great assistance to Trustees to deliver the best outcomes for their members.

An excellent move by the regulators is to direct funds to concentrate on outcomes that are important for the members of their funds and, in so doing, become less peer-driven.  The new Design and Distribution requirements emphasise this more. The heatmap has the potential to undo some of the good work that has been done in this area.

Trustees who believe a different strategy is more suitable for their members risk suffering underperformance as a bubble inflates. They will be discouraged from looking outside the reference portfolio.

In time, assets represented by the reference portfolio will become highly priced relative to other assets but there will be no incentive for Trustees to seek the better-value assets. The whole industry risks being invested in a “crowded trade” chosen by the regulator.  At the same time potential future growth engines for the economy will be starved of capital.

There are already signs that increasing allocations to passive investments are causing market distortions[3] both in Australia and overseas.  The heatmap’s focus on passive benchmarks that have no specific regard to a fund’s members has the potential to exacerbate a serious institutionalised systemic risk for the superannuation system as well as the whole economy.

Furthermore, when reporting performance funds are required to state that past performance cannot be relied upon for future returns.  There are solid reasons for this but unfortunately there are still many who move their money to the investment with the best historic performance, oftentimes to their future detriment.

Australia’s Future Fund is justifiably held in high regard but applying the APRA heatmap metrics to this successful investor gives some context over the potential misuse of APRA’s heatmap. The Future Fund does not operate with an asset allocation benchmark and also employs a significant allocation to alternative assets, which tend to be expensive in terms of fees. It is also a fund with no expected additional inflow that will eventually experience negative cash flow.

So, despite its excellent track record and the high regard in which it is held, there are likely to be periods of time when even the Future Fund would not appear lily-white on an APRA heatmap.

David Hartley is the founder of David Hartley Consulting Services. The opinions expressed in this article are solely his own.

[1] One could question, for example, the appropriateness of a bond index that includes negative yielding bonds

[2] See Submission 12 and Submission DR 82 to the Productivity Commission for more detail: https://www.pc.gov.au/inquiries/completed/superannuation/competitiveness-efficiency/submissions