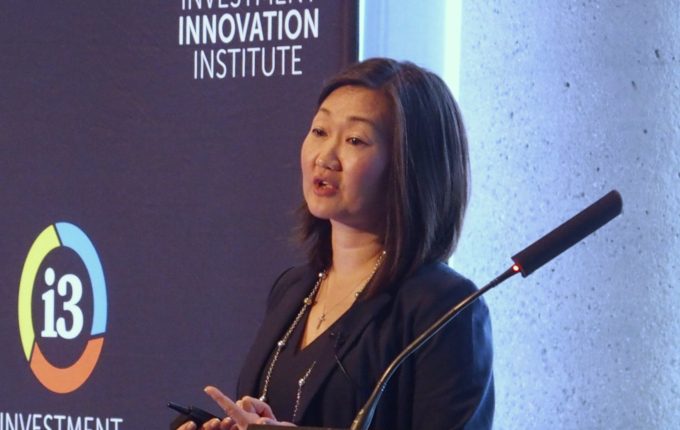 In 2008, at the height of the Global Financial Crisis (GFC), Susan Oh was managing non-United States equities for Pennsylvanian pension fund Public School Employees’ Retirement System (PSERS) as she had been doing for nearly a decade.

Like many of her peers, Oh saw her portfolio take a serious plunge and yet there was very little she could do about it. It was an experience that changed the way she perceived investing.

“Going into 2008, we had a 70/30 portfolio, which was pretty close to the portfolio everyone else had at the time,” Oh, Director, Risk Parity, Currency Hedging and Strategic Implementation, at PSERS recalls in an interview with [i3] Insights.

“I was managing a non-US equity portfolio which I started in 1999 and I saw how my portfolio got cut in such a significant way during 2008 and yet it was one of the largest portfolios that we allocated assets to.”

Unlike many of her equity peers, Oh wasn’t satisfied with the justification that her job was one of relative performance. She wanted to get to the core of the problem and asked herself: Why are we not paying more attention to asset allocation?

“I was on a hunt to discover what the optimal asset allocation was. It was not something I paid a lot of attention to before because I was managing non-US equities. But it made me realise that this is worth pursuing because it had such a large impact on the portfolio,” she says.

“I found out that the reason why most people don’t pursue asset allocation is because it is too hard. They might think it is market timing, while deviating from your peers is a career risk.

“It is more rewarding to seek alpha because you can see in a relatively short period of time your added value. Most of the time your bonus is related to that, so there is an incentive to focus on alpha. The whole industry has an obsession around alpha and there isn’t much obsession around beta.”

As an equity portfolio manager, Oh was aware of how much equity volatility dominates the overall portfolio risk and she searched for a way to reduce equities risk without reducing the overall performance too much.

This quest eventually led her to risk parity.

“Risk parity runs on neutralising the sensitivity coming from inflation and growth, which are the primary drivers of asset price volatility. If you can neutralise those two factors, then what you are left with is the risk premium that investors are willing to pay. That portfolio is much more stable than what you would have otherwise,” she says.

“We had a relationship with Bridgewater at the time for our TIPS (Treasury inflation-protected securities) portfolio and they had been talking to us about their All Weather strategy. It was really interesting to me, even prior to the crisis, but when you are generating double-digit returns, the last thing people want to do is try something new.

“But after 2008 there was a little more interest. So we started to add more in diversifying asset classes, starting with TIPS. As we got more serious about forming an asset allocation-driven investment process, I felt that the best way to truly understand the risk parity framework was to manage it internally.”

But for this to work, Oh realised she had to start small.

“We were actually the first US pension fund to manage non-US equities internally. We started a non-US equity portfolio at US$300 million and it had grown to US$8 billion at its peak. I thought we could do something similar with risk parity,” she says.

“So we decided to implement it with US$100 million and that started in January 2013. In hindsight, I’m thankful that we started with US$100 million because the middle of 2013 was a very difficult time for risk parity and we learned a lot from how it would perform in times when correlations come close to one.

“We were learning more about how to manage leverage and counterparty risk, and how to move around physicals, swaps and futures. What is the most efficient way of gaining exposure in these markets?”

The move saw Oh transition from equity portfolio manager to the responsible person for the risk parity strategy.

“By becoming the person who managed risk parity, I became the person who thought about asset allocation every day. It allowed me to look at all liquid asset classes on a daily basis and that was huge because I was only doing non-US equities,” she says.

“So as time went on we went from 5 per cent to 8 per cent to 10 per cent and recently we were in a de-risking mode and so last year, on 1 October, we decided to go back to 8 per cent. But that wasn’t because of the lack of faith in risk parity, but because we had been de-risking.

James Grossman, Chief Investment Officer of PSERS, supported Oh’s work and elements of the risk parity approach are now applied to the overall portfolio. “Susan had really developed a passion for an asset allocation-focused investment process and thought that risk parity was a better way to allocate assets and manage risk than a traditional 60/40 portfolio,” Grossman says.

“A lot of risk parity concepts are used today at the fund’s total portfolio level. At PSERS, we are continuing an evolutionary process towards better balance, which I believe is very important given the many political and economic uncertainties we all face today.”

But the process of implementing some of these ideas in the broader portfolio was a gradual one, Oh says.

“We were using the incubated ideas that we were running at a small scale and unfolded that into the total portfolio. We knew which asset class would give us the most risk balance and we continued focus on adding those asset classes,” she says.

“And it is not just asset classes. Some of the asset classes we already had, but we just had to weight them differently. So over time we have reduced our weighting to global equities and have increased our exposure to fixed income and real assets.”

Since the end of the GFC, PSERS has returned 8.6 per cent net of fees, adding 1.6 per cent over a global 60/40 index portfolio, with the fund saying this was done at 33 per cent less risk. But despite these results, the fund has faced criticism over its high level of illiquid assets and the level of fees paid to external managers.

At the end of the year, the commission issued its final report,, which among other things recommended moving all public equities and fixed income investments to passive strategies, including the fund’s internal strategies, in an effort to save fees.

It recommended risk be reduced through limits on the level of illiquid investments the fund can hold and also criticised the fund for using leverage.

“The use of leverage by US pension funds is extremely rare and to the extent to which PSERS uses leverage is an anomaly, the risks of which are not widely understood by stakeholders,” the commission states in the report.

Harsh words. But Oh says these issues could be addressed by educating the stakeholders involved on the function of leverage, as leverage in itself doesn’t necessarily increase risk.

“Leverage is a word that people often associate with taking more risk, but actually we use it to diversify and reduce risk,” she says.

“It is important to understand that through the risk parity approach we took down the embedded leverage in equities, which is packaged leverage, and have increased explicit leverage.

“It has been an exchange; we didn’t actually increase the risk of the portfolio. We had 70 per cent in equities and now we have 30 per cent. That is a huge reduction [in risk].”

Grossman credits the fund’s Board of Trustees for keeping an open mind towards leverage.

“Our Board of Trustees has done a very good job of taking time to understand leverage and our use of it in the asset allocation. While it can be an intimidating proposition to those less educated on such matters, our trustees took a leadership role in being one of the first large public pension systems in the US to employ modest leverage to better diversify the asset allocation,” he says.

Another commonly held criticism of the risk parity approach is that it is vastly more complex than a 60/40 portfolio and this could create oversights. But Oh says it comes down to using the right tools at the right time.

“I love simplicity and I always seek simplicity. But at times you need to get more sophisticated in your approach to manage your risks better. You need to build those tools in your toolbox so you can use them when it is most optimal,” she says.

A pertinent example is the fund’s use of swaps. Not many US pension funds manage a swap program internally, but PSERS has done so since 2006, largely for tactical reasons. Knowing how to use swaps helped the fund avoid a situation where it was nearly forced to sell its equity holdings during the GFC, which would have meant locking in the devastating losses posted by this asset class.

“What happened during the GFC was that we went through a period of substantial negative cash flow and we didn’t have cash to pay the benefits at times,” Oh explains.

“We had a choice to either sell equities or to do a swap and keep the exposure on until the time we got the contributions, and that is what we did.

“We got a large-sized swap to buy the time, we kept exposure on and when the contributions came in we could then turn that into physical assets. But if we didn’t have that tool, then we may have been forced to sell.”

Although Oh couldn’t have anticipated the review of the commission when she started her search for a better way to address asset allocation, she knew that focusing on this aspect of investing was always going to be hard.

The current market environment, where we could see rising interest rates and, therefore, potentially falling bond returns doesn’t help in promoting the risk parity approach, but she is adamant these challenges can be overcome if managed appropriately – the key reason Oh wanted to bring the strategy in-house in the first place.

“You have to be thoughtful on how you manage risk parity. You can’t just mindlessly equal-weight all asset classes.

“The thing I always come back to is what’s most important for PSERS: if we as a fund can reach our target returns and take less risk to get there, then that flows directly through to raising the ability of the fund to pay its obligations,” she says.

The Future of Fund Management MarketFox – The Curse of Information