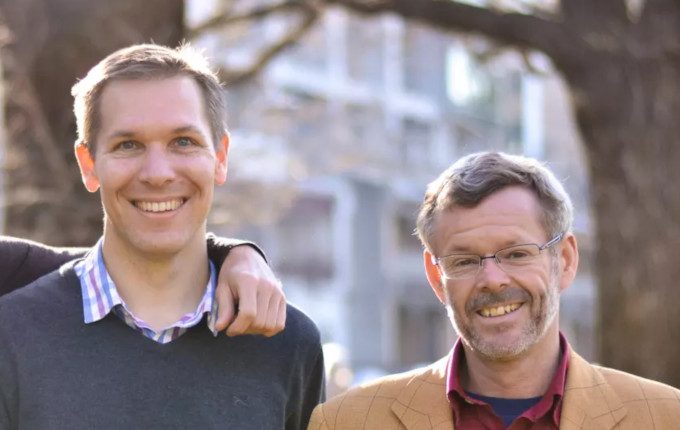 Professors Carsten Murawski (l) and Peter Bossaerts (r) of the Brain, Mind & Markets Lab at the University of Melbourne

Finding solutions to complex problems is often not about more information, as we do in statistics, but about finding novel ways to combine existing information, Professor Carsten Murowski says. Unfortunately, this type of complexity is where computers fail miserably.

When Professors Peter Bossaerts and Carsten Murawski of the University of Melbourne came to the Sydney office of JB Were to explain their research into the neurological foundations of financial decision making they brought with them two unusual props: a glass jar with colourful balls of bubble gum and a thousand piece jigsaw puzzle.

Yet, these props went a long way in explaining the fundamental differences between two types of everyday problems.

The jar problem is one of probability, where the availability of additional information leads to an increasingly accurate answer. Computers are good at solving these problems.

But the puzzle problem is an entirely different beast.

All the necessary information is right there; it is finding the right way to combine this information what makes it so difficult. Here, computers fail miserably.

To give the puzzle problem more of a financial flavour, Bossaerts added a few dimensions to the problem.

“First, I’m not going to give you all the time in the world to solve this problem,” he told participants at the briefing. “You’ve got two hours.

“Now, you’ve got to decide which part of the puzzle you are going to solve, because you want to put down as many pieces as you possibly can within two hours.

“To make it more interesting, on the back of these jigsaw pieces there are numbers. They are dollar values. The goal is now, in the time that you are given, to solve the part of the puzzle that maximises the value [of the completed part of the puzzle].

“To make it even more interesting, I’m not going to show you what the [finished] puzzle looks like.

“This is a very complicated problem; we know that computers choke on it,” he said.

In computer science, the puzzle problem is called an ‘intractable problem’. There are no efficient algorithms to solve these types of problems.

Yet, it is these types of problems that investment professionals try to solve every day.

“If you are a hedge fund manager, then what is your most important problem? To find where the right investments are and how to combine them in the right way. So you have a dollar value here and you have a thousand pieces, but then you have to come up with a portfolio that is coherent. That is the job you have to do. You are not asked how many balls there are in the jar,” he said.

Humans are much better at these problems than computers are, but we don’t know exactly why. Bossaerts and Murawski are trying to find answers to questions about solving complex problems through experiments at the Melbourne University’s Brain, Mind and Markets lab.

“If you give [computers] 100,000 puzzles, then they are likely able to solve them. But if you then give them a puzzle with a different picture, they will completely fail. Yet, humans are still able to do that.

Murawski said that one of the key questions in solving complex problems is how to determine the level of complexity.

“How do you determine how difficult it is to solve the puzzle? In the case of the puzzle it is not just the number of pieces. It is also about the shape of the pieces and a few other properties.

“Just knowing the number of pieces doesn’t tell you whether this is an easy problem, or a much, much harder problem,” he said.

Besides, is complexity in the eye of the beholder or are some problems simply more difficult to solve than others?

“The belief at the moment in computer science, where this is formally studied, is that problems have inherent complexity that you can’t reduce. For example, we know that sorting an array of numbers is much easier than cracking an encryption algorithm,” Murawski said.

“So at the moment, we believe that problems differ in their degree of complexity. One interesting question is then: ‘What is the complexity of the problems we face in finance?’ It turns out that a lot of the problems that portfolio managers face are those of the hard kind,” he says.

Humans are relatively good at solving these types of problems, but not everyone is able to do so to the same degree

“We try to solve these questions and do experiments in our lab and observe people’s behaviour,” Murawski says.

Of course, the lab’s experiments don’t involve jigsaw puzzles. Instead, the experiments focus on how the brain and body responds to complex problems.

People can do things that computer algorithms can’t do. For example, people can tell how difficult a problem is before they start solving it

“We don’t actually give them jigsaw puzzles, because it turns out they are actually too easy,” Murawski said.

“We use eye tracking and this allows us to trace what information people look at on a screen, which gets us closer to the kind of mental algorithms people use. We also do brain imaging to see what kinds of information is processed by the different brain circuitry,” he said.

The holy grail is to find that part of the brain that assesses the complexity of problems and Murawski hopes to one day identify exactly how the brain does this.

“People can do things that computer algorithms can’t do. For example, people can tell how difficult a problem is before they start solving it,” he says.

“One of the things we are working on at the moment is that we hunt for that signal in the brain that does that computation. That would be something that would give us tremendous insights into improving machine learning algorithms.”

To learn more about the research that the Brain, Mind & Markets Lab does and to get access to its publications, please visit: http://bmmlab.org/

In Search of Temperament – Final The Science of Hedging