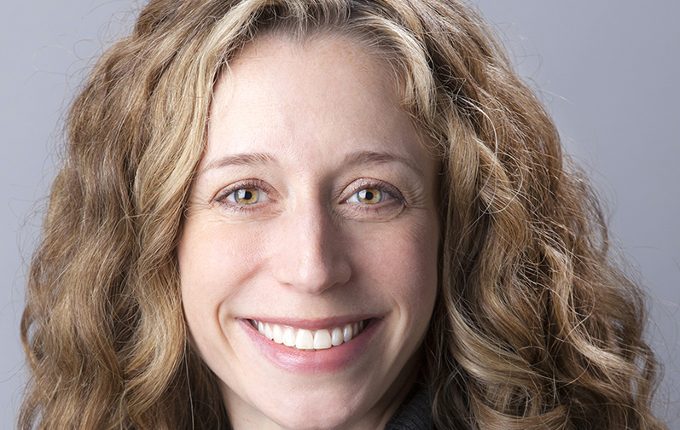 In 2014, Bespoke Investment Group, a United States-based investment advisory firm, created an index and called it the Death by Amazon Index. This index tracks the performance of traditional retailers that don’t have their own brands, don’t focus on e-commerce and do not sell specialty products that Amazon does not focus on.

Until mid-2015, an equal-weighted version of the index outperformed the S&P 1500 Index by a comfortable margin, but cracks started to show in early 2015. By mid 2016, these stocks were lagging the broader market quite dramatically.

The question is whether this underperformance is cyclical or structural?

If it is structural, then it is not just the traditional retail companies that will be the victims of e-commerce behemoth Amazon. Among the many victims could potentially be value-style investment firms.

Value investors too have been struggling to outperform in the current market, where the domination of a handful of technology companies is so strong some investors view them as natural monopolies.

Value investors rely on a temporary discount, usually when a company goes through a period of difficulty, but where they ultimately pull through or have enough assets to reasonably expect a recovery of the stock price. They typically favour well-established, conservative companies that have track records of performing well in the past.

But the current climate is dominated by a growth momentum that seems never-ending and increasingly concentrated in just a handful of companies.

Yet Allison Fisch, Principal and Portfolio Manager with value investment firm Pzena Investment Management, is optimistic about the future.

“I’ve got a colleague who likes to think about this sort of thing as there is a big bathtub full of water and somebody has pulled the plug. You have some business models that are circling the drain and then you have some that are sitting at the top of the bathtub,” Fisch tells Daniel Grioli in an interview for the [i3] Podcast series.

“Really, the job for a serious value investor at this point is to be able to differentiate between the two. I can’t promise we get them all right, but the beauty of being a value investor in this environment is that you do have this portfolio of opportunities.

“If you buy the stocks that are priced as if they are going to fail and you think they are not and you have downside protection embedded in the business, then it is quite an interesting opportunity.”

Fisch acknowledges the current market climate is unusual because disruption is taking place in so many different industries all at the same time.

“Disruption has really derailed what should be a great environment for value stocks in the past year, because these disruptors have really taken off in terms of valuations,” she says.

“Certainly in our developed market exposures we have seen a lot of our incumbents getting cheaper and cheaper. But the disruptors are at valuations that we don’t believe fundamentals justify for the most part.”

But she also points out that in almost every value cycle there has been some sort of disruption that is causing companies to get cheaper.

“In the late ‘90s, the disruption at that time was all these companies that were producing in China. Everybody thought that these developed market, industrial companies were going out of business because China was going to take over the world,” she says.

“Well, that didn’t happen. But what did happen? Everybody moved production to China. So you see that businesses tend to have levers to pull and deflect … [maybe] not every business and that is where research comes in,” she says. 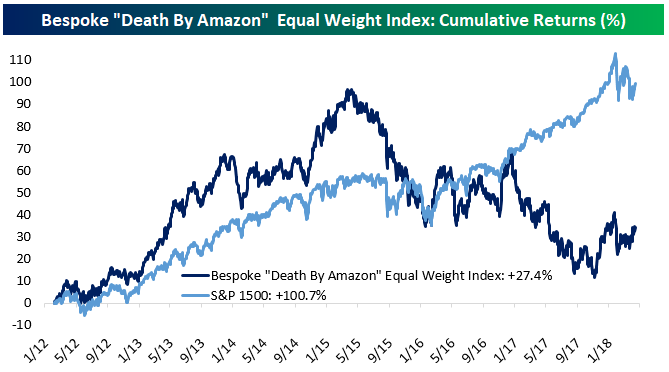 Bespoke Investment Group created the ‘Death by Amazon’ Index in 2014 and this index tracks the performance of traditional retailers, without their own brands, or without a focus on e-commerce or a dedication to specialty products that Amazon does not focus on. Surprisingly this chart shows that the equal-weight version of the index outperformed the S&P 1500 significantly until early 2015. But since then these stocks have lagged quite dramatically. Is this cyclical or structural? For more information on this index, please click here

Yet the unprecedented way in which Amazon is harvesting modern technology is changing consumers’ behaviour.

Grioli narrates the story in which people who would never buy home brand batteries in a supermarket are now swayed by the insistence of Amazon in recommending its home brand while at the same time being shown positive feedback from shoppers.

Value investors typically pay attention to the strength of a company’s brand as this creates barriers for neophytes to enter an industry. But does Amazon’s behaviour, as illustrated by the battery example, reduce the effectiveness of brands?

“There are different types of moat and the moat you are talking about is the moat of brand. This is a very big issue and one that is facing the advertising agencies as well: their customers are in trouble. They are under attack not just from Amazon’s private label, although the threat is real, but also the moat of brand is not what it used to be,” Fisch says.

“Whether it is private label stuff, or a social media upstart that is not using traditional advertising and can make its way through using the distribution channel that Amazon presents, this is a real threat. One thing in the defence of these companies is that when you eventually see one of these challenger brands get big enough, they tend to get bought by a big company anyway.

“The moat of brand is a bit of a nebulous one; it is an intangible and you see it being written off all the time.”

Fisch specialises in emerging markets and although these markets are also dominated by a handful of large technology companies, including Alibaba, Baidu and Tencent, she questions whether you can speak of disruption here.

Besides, not every industry is likely to be disrupted, she says. For example, Amazon is good at selling and distributing relatively generic items, but when more specialised knowledge is required, the company starts to struggle.

“It really depends on what the industry is and what the potential for disruption is and what you need to have in order to be successful in that industry. You look at something like books and CDs and that is very easily disrupted. Amazon makes sense here; it should win,” Fisch says.

“Some other industries we think are a bit more protected and I’m thinking of things like pharmaceutical distribution where you need a lot of licensing, there are a lot of regulatory barriers, it is already a very well-consolidated industry within the US, operating with very thin margins.

“Not much of a space for Amazon there, despite the fact that the companies are discounted as though there is.

“We also have passed on a lot of investments, because it all depends on where in the value cycle you are playing.

“If you are a player who is dealing in thousands and thousands of SKUs (stock keeping units) where you need specialist experience and expertise in helping customers, as well as having working capital and inventory management, that is not quite Amazon’s bread and butter.

“But if you are more of a commodity player, distributing toilet paper and plastic gloves, that is going to be wiped out by Amazon.”

Technology Catches Up to Current Investment Thinking 5% of Portfolio will Kill the Rest: Sicilia